Journeys into the alien minds among us: Beginning the bjoite series

The bjoite have been here for hundreds of years and revealed themselves well over a century ago, but my stories about them are new. I just recently published the first one in three e-book venues. There will be more to come. People have been asking about the back story and other details. Also, I think it’s a good time for literary science fiction. Or SF-extended literary writing.

Humans and bjoite have not had an easy time together. In some parts of the world, especially where overfishing has depleted marine life, bjoite are still being killed and eaten in what used to be traditional seafood dishes. In the United States, they have the same status as farm animals in most states—not to be abused, but fine to slaughter and exploit. 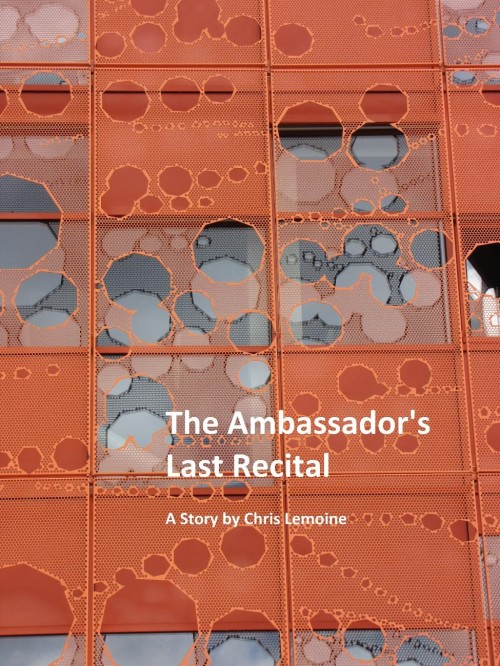 The fourteenth bjoite ambassador, stationed in San Francisco like all of his predecessors, really wants to do nothing more than play the piano and enjoy classical music, the one thing he likes best about our culture. Instead, he has to fend off assassination attempts, listen to insults, get distracted by pop tunes, and waste time with bureaucratic busywork. Still, he manages to organize for himself one last piano performance in San Francisco’s Symphony Hall and prepare for it. The concert will happen just a couple of days before the ambassador ends his assignment and leaves our planet. Fully aware of the danger to his life, he looks forward to playing some of his favorite compositions. He even invites a special guest.

Will the ambassador survive and get to go home? Who is after him this time, and why? What are bjoite like, anyway? Find out in the first of the bjoite stories, The Ambassador’s Last Recital. I promise it’s unlike anything else you’re reading this year. Also, it’s only $1.99, and your correspondent needs cash to continue his research and documentation of all matters bjoite.

I didn’t much like the SF magazines I explored or else the story just didn’t seem like a good fit. You can find it as an ebook in different formats:

If you give the story a good review or rating, thank you, that is very helpful. If it’s truthful, even better. No, I won’t tell you how it ends. Enjoy a couple of hours of time off from your regular day!

I’ve been busy doing lots of other writing in addition to what I do for paying clients. But this is not the huge big, reality-swapping, murder-happy kitsch extravaganza that some of you heard about. That’s currently being queried to a number of agents. I’m still hoping that one of them might be totally disgusted with the sample materials, loathes the whole thing after reviewing it, and sells it to a publisher because it will surely appeal to certain people.

To be continued. Thanks for listening!

Grinning Idiot at the edge of disaster

Have you seen him? He stands by and watches, often with an eyebrow raised and the hint of a smile, when horrible things happen to other people. I’ve come across him way too many times.

When I went to school in Germany, violence and bullying were pervasive. Until I grew out of it, I was an obese child and mercilessly bullied for it. Grinning Idiot always stood around when people were beaten or otherwise abused. He never said anything, never participated, and never lifted a finger to stop what was going on.

When we students demonstrated against the Vietnam War or marched for other political causes, Grinning Idiot could be right there with us, as if we had dragged him along. Or, he stood on the sidewalk, watching. He didn’t start smiling until the police started arresting people. But then he hung around until it was all over and the vans hauled folks off to the precinct.

Later in life, I was sometimes in workplaces where groups of people were laid off at the same time. Grinning Idiot sat around doing work or screwing off, trying to figure out who would remain. He never showed any empathy for people who were let go and didn’t have any critical or other comments to share. When it was time for lunch, he ate. 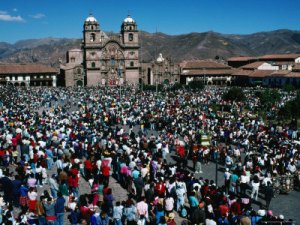 I’ve seen Grinning Idiot many times in pictures and news footage. He stands around when the Nazis beat up on Jews, communists, gays, and other trouble-makers, for example. Never takes part unless forced, never helps anybody. Just watches and smiles a little. He seems to love watching people being loaded into railway cars—that’s when he shows up in a crowd, feeling safe because it wasn’t his turn. Of course, for him a crowd to disappear in can be as small as three or four people.

Which reminds me, have you seen photographs of lynchings in the United States? There are the perpetrators, who often stand and laugh proudly next to a dead black man, hanged or beaten to death on the ground. Grinning Idiot is right there, just a little off-center, often looking slightly away from the camera’s eye, with his little smirk.

In groups of friends at dinner, a party, or some other event, Grinning Idiot never provokes a conflict or disagreement, but doesn’t mind when somebody else does. He keeps quiet and watches what other people do. As soon as he has figured out who is on the winning side in an argument, he nudges over there to share that person’s shadow.

Do you know who I’m talking about? 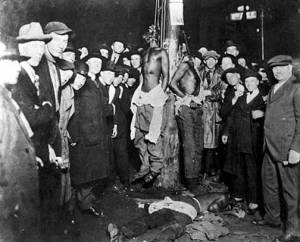 …or in a smaller gathering, like at a lynching. Take a look at people’s faces, if you would.

If you know Grinning Idiot, how do you relate to him? Are you his friend, neighbor, trusted interlocutor? Have you ever been this person?

Sometimes it seems as if much of the world’s trouble would be impossible without Grinning Idiot standing by and letting it happen. He provides the silent chorus of approval for misery. He’s done this for many centuries. Isn’t it time we got rid of him, one by one? Even if he is you or me?

Grinning Idiot is not brave or smart, and often he knows that. He never leads and never starts a song. Sometimes you can shame him, send him packing, or provoke him into taking a stand. Whatever you do, you need to account for him, because in his idiotic way, through sheer inertia and ineptness, he is extremely powerful. Don’t ignore him, or he’ll stand and smirk when calamity comes for you, not the least bit inclined to help. You don’t want to wait that long.

Do you know of any good ways to deal with Grinning Idiot?